It’s been a while since I played a Big Fish Game but when I saw the game Bonfire Stories: The Faceless Gravedigger selling for $2 I thought why not. Upon logging in though the price changed to $6. It seems the promotion is only valid for new subscribers.

I’m assuming the game is part of a Bonfire Stories hidden game series. One thing about me is that I’m not a huge fan of hidden object games. I prefer mini-games over hidden objects but every now and then I get in the mood to play one when I don’t want to think too much. 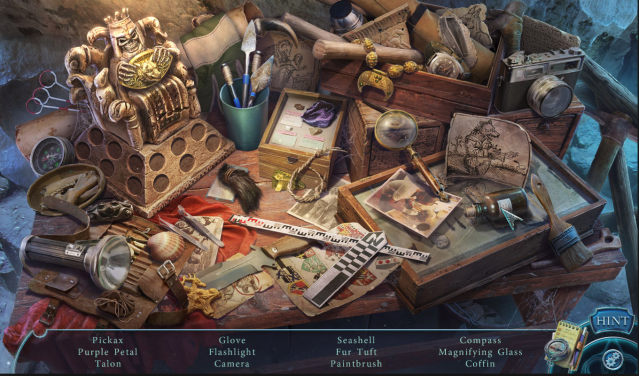 The story is about a group of friends who decide to camp in the forest of Quiet Grove. At night, they gather around a bonfire and tell each other spooky stories. One of the gang members tells the story of the faceless gravedigger and that’s when your game launches. As usual you’re either a journalist or a cop trying to follow the lead of a mysterious phenomenon and in this one- you probably guessed it- is a faceless cult of gravediggers.

The story is a little cheesy not to mention the transition of cutscenes can be rushed and laughable but the graphics look ok. In some parts like the Cinema & Reception the design is nostalgic and 60s style which I’m a sucker for. They tried to be inventive with the hidden object games which was nice so there’s a bit of variety. One that stood out for me was an audio-based hidden object which frankly I haven’t seen done before. A conversation takes place and you have to find the items spoken. 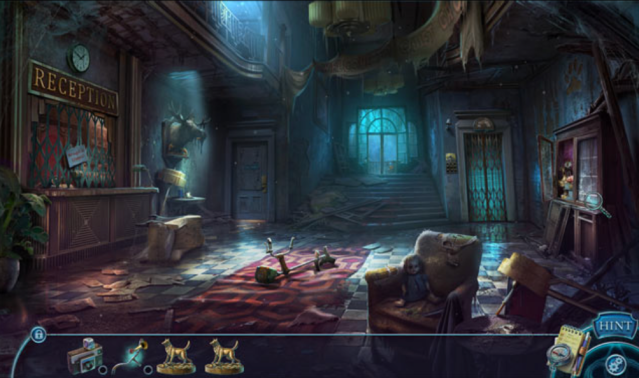 Aside from that item manipulation- which I usually enjoy- was average. In the beginning it was okay but eventually I noticed they make you find the same items, not sure why. You can combine the items but everything is very straightforward. There’s also no journal to refer to- only a map and a task list, which is very odd. The funny thing is that I hardly ever use the notebooks/journals in adventure hidden object games but in this one they wanted you to remember certain code combinations. In some mini games, as is customary, they’ll let you see the code clue you find side by side with the mini game, but in others you have to depend on your memory. Which is fine but with these games it’s something unexpected as the majority of the game is easy and doesn’t demand jotting anything down or trying to remember. When I clicked on the information button it laughably said “it’s the same code and letters you heard so many times in the game”. I guess the game designer was bored that day. 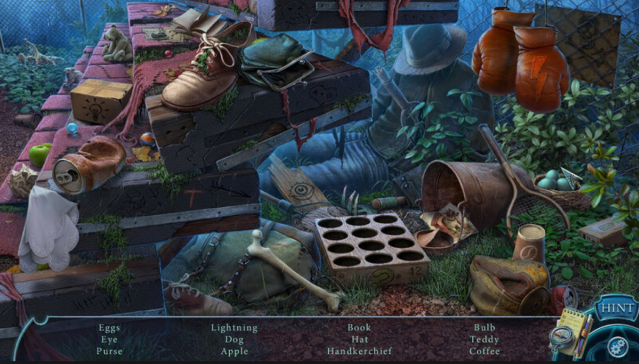 The mini games were fine. In fact, some of them actually made me think for a change. They weren’t exceptionally difficult but they weren’t that easy either. Overall the game lasted for about 2 hours, which is not very long but for the promotional $2 they’re offering (provided you’re a new subscriber) I think it’s fair.

I’m sure it’s even cheaper (if not free) for the iPad and iPhone. Would I play it again? Definitely not. Would I recommend it? Probably not but possibly, if I stumbled on it and someone happened to ask me about a game at that very moment in need of something laid-back to play to waste time- I might.

Note: The link provided here is for the Collector’s Edition which is $13- Couldn’t find the standard  Not sure why they have so many different prices for the same game. Aside from the collector’s edition which is usually pricier there’s also $6 and $9 and the $2 promotion. I definitely don’t think this is worth $13.